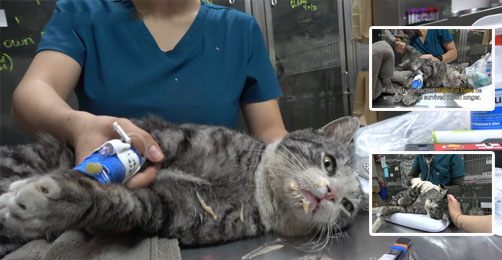 Hope For Paws received an emergency text about an injured cat, and JoAnn set out for rescue right away.

Upon arrival, she learned that the poor feline hadn’t moved an inch since the girl found him yesterday, and he was crying out for help with some heartbreaking meows. He was desperate for help and needed proper care right away.

Seeing how much pain the cat was in, JoAnn was careful to wrap him with a towel to pick him up and transfer him to the crate for a ride back to the hospital for evaluation. And it was at C.A.R.E.S. that they discovered Tater Tot had a urinary blockage. But after a procedure to fix that and recover, the cat still didn’t seem right.

Something was obviously still wrong, so the medical staff took another look. And that’s when they found a pellet lodged near his sp.i.ne from being sh.o.t with a BB gun. How people continue to act so cr.ue.lly to such innocent animals is beyond comprehension, and now a serious surgery was required.

A week later, it was really something to see Tater Tot sitting up on his own! After everything this poor cat had gone through, he deserves nothing more than a loving forever home. In the meantime, he’s in great hands with his foster at Cats At The Studios!