The adventure of the polar bear cubs: Rodeo cub riding on the mother 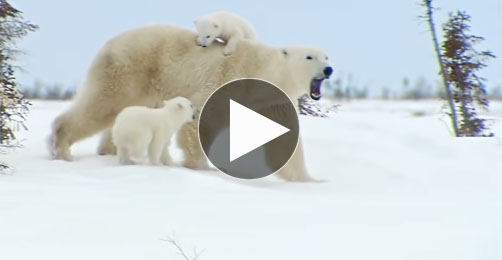 The Arctic is one of the most hostile regions on earth. In winter, storms hit the country at more than 100 km/h and temperatures drop to – 60 °C. In the midst of this inhospitable world lies the nursery of polar bears, ringed seals, walruses, and beluga whales. Hidden deep in her snow cave, a polar bear waits for winter to end. She has offspring—triplets! a rarity among large predators. The bear has not left her den for more than five months. Her young were born here and will soon see the light of day for the first time in the white world. She takes care of the little ones with love and patience. The young polar bears have only a few summer months to learn how to survive in the Arctic. As soon as the weather permits, the family makes the long trek to their hunting grounds, far up north. ..

Walrus and ringed seal babies also have to assert themselves against the rough nature. Your worst enemy is the polar bear. Often enough, they are lucky, because only every tenth attack by a polar bear on a seal is successful. Another mysterious creature that lives deep in the Arctic waters also benefits from the polar bears’ failure: the ice shark. Every dead seal that slides down into the water attracts the scavenger from many kilometers away. For the first time, unique and spooky pictures of the almost unknown ice shark!

Yes, it is very difficult in such conditions to save the life of your children, feed and warm them and soak yourself! Very touching and cute at the same time! Thanks for the video, very touching! Thank you and wish you health, happiness and joy!