CROW IN WORK! A bird that puts cats, dogs, gulls and even an owl in their place! 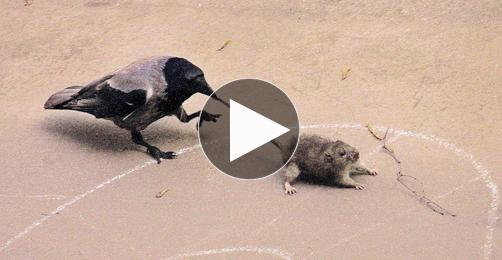 As a child, I had a tame jackdaw. She begged a chick from the guys, she accompanied me everywhere-she dined with me at the table, loved scrambled eggs very much, sat on my head when I rode a bicycle to the store for bread, flew in there for me and flew around the shelves, then again rode on my head. When Galya grew up, she joined the flock, but as soon as I shouted Galya, Galya, she flew to me. In my absence, Tyutina began to dirty the threshold, and her parents took her by car for 30 km. When they returned, Galya was already at home. Galya also stole colored scarves, and after leaf fall, they were found on a tree. With warmth and longing, I remember my wonderful Galya. I wish the children had such a friend!

We don’t have crows in Kamchatka, only crows. My dad once started to treat a crow. She croaked unusually. Hooray! Dad laughed and addressed me as Yura!I made her a feeder and put tasty treats like cheese and pancakes. The crow then decided to thank him. She hung a dead rat on a tree in front of the balcony and called Dad. He went out onto the balcony, and she jumped up and showed him the rat. Help yourself! Over the summer, she beat all the rats on the site. I dug in the beds. Weeding or loosening the bed, oops, crow pantry! Somehow, a chick, an adult, fell out of a nest in a tree near the house but did not know how to fly yet. From where a flock flew in, about thirty, were wailing, flapping their wings. The crow fell behind the barrel; he could not get out. I went out, got it, put it on the fence. Two crows pressed the chick from the sides and galloped away. I didn’t even have time to understand where. Then the flock circled, shouted differently, not desperately, but joyfully, and flew away. How many times have I watched how crows arrive when food is taken out to the yard dog? One near his muzzle grimaces, and the other steals food. And vice versa. And then they neigh like crows. I also saw how a crow in flight tumbles over its head like a dove. For a long time, she flew and had fun.

I watched as the crow took out the rest of the sour cream from the glass jar. The neck is narrow, the head won’t get through… The crow took the jar in its beak, flew up higher and threw the jar to the ground. The jar fell, but did not break into the grass. Then the crow flew up to the jar, sat, thought (amusingly tilting its head to the side), and then again took the jar in its beak and flew off to the paved road. She threw it on the asphalt, and then, pleased, she pecked at the sour cream from the pieces.