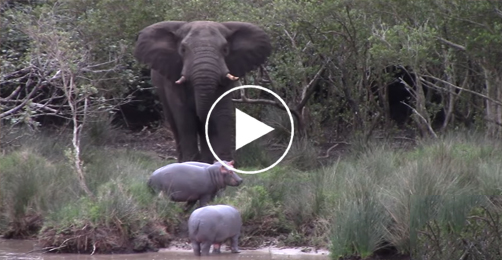 Evan Malsbury caught this footage at South Africa’s Umfolozi River. “We were part of an organized tour group that had scheduled for a river cruise,” he said of the sighting. There were a few other boats on the river, but nothing exceptional prior to this observation; there were just a lot of hippo groups grazing along the river.”

“Seeing elephants down the river as part of this trip was exceedingly unusual, according to the boat driver and tour director, so everyone on board was jockeying for a better look.” We noticed an elephant near to the water’s edge at that point. The elephant was alone for a bit until the trio of hippos arrived, and the drama was turned up to eleven. The elephant was no match for the hungry hippos, but happily no one was wounded except the tree.”

“Apparently, even the tour director/cruise driver had never seen anything like it, and it was the most strange thing we saw on our 14-day journey to South Africa.” The tour operator suggested that the hippos were younger and learning how to interact with elephants, while the elephants were simply attempting to cross the river. To me, it all appeared like a territorial standoff.”