After the terrifying world destroyed his face, a man tenderly wrapped the dog in bandages. 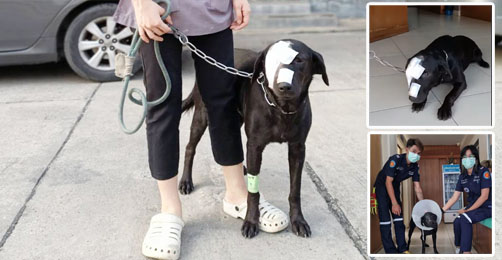 Homeless animals are vulnerable to nearly everything. Whether they’re seeking shelter or food, they must contend with the busy world around them.

One dog that was trying to find some scraps to eat was tragically hit by a speeding motorcycle. His injuries were so severe that no one was sure he would survive. But thankfully, he was not left on his own to perish. 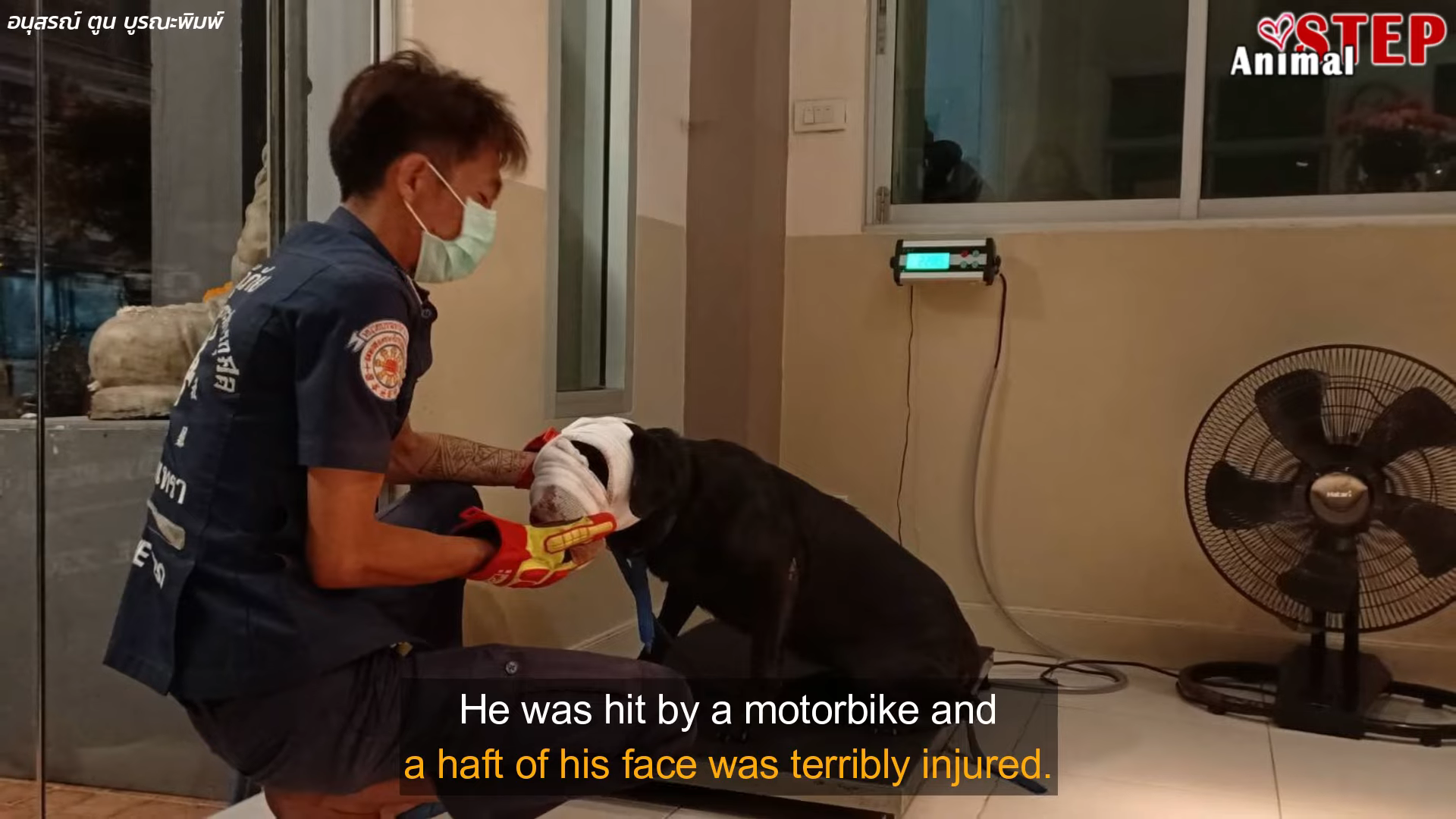 When a person finally cared enough to reach out for help, rescuers came immediately. They loaded up their animal rescue ambulance and headed over to check out the dog. The pup, later named Black Bangpakong (we will call him Black for short), was so badly injured he couldn’t even sit up by himself. The brunt of the crash, the sheer force of it, affected his face the most. He laid there in desperate need of medical attention. 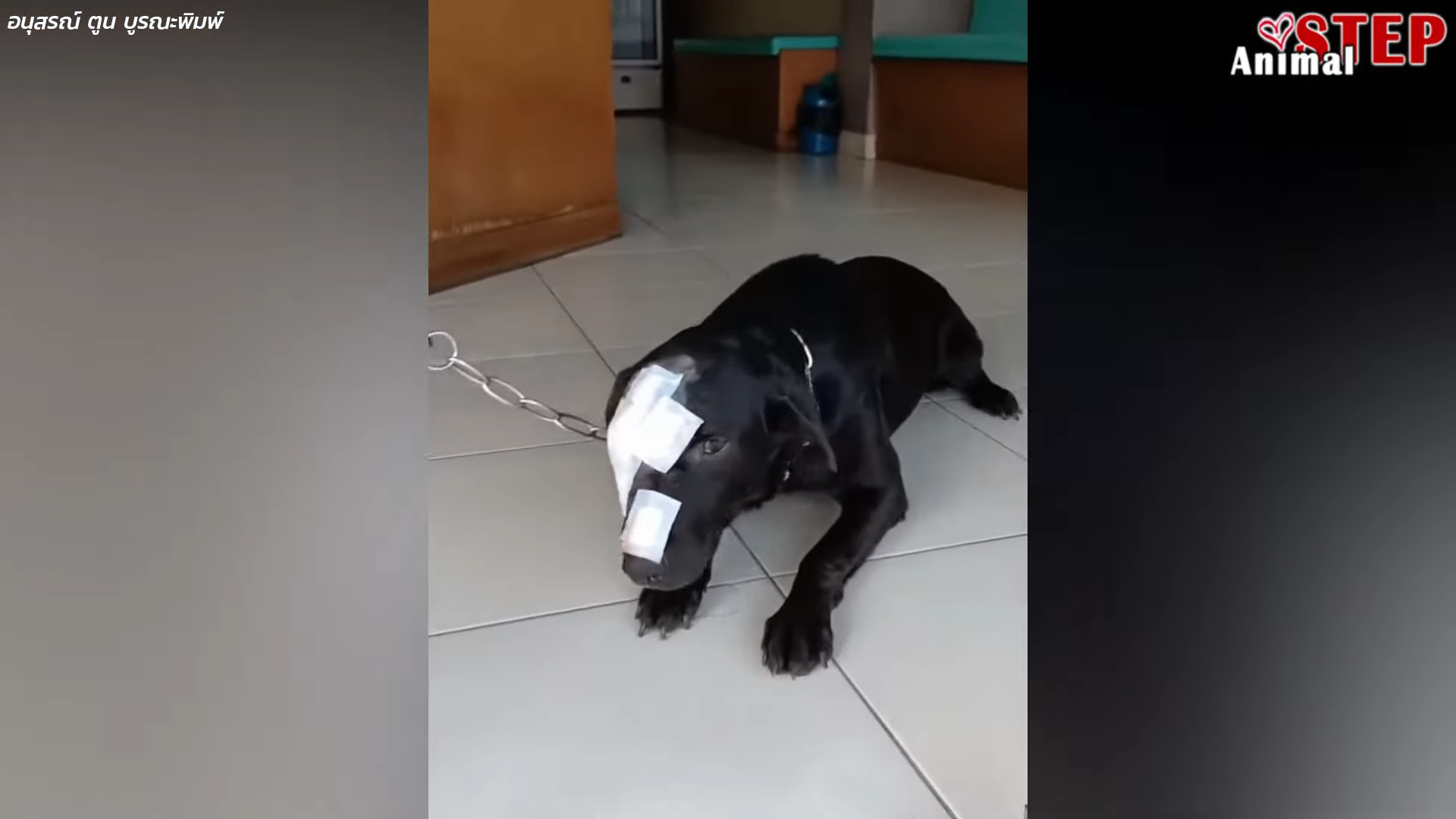 These unique animal rescuers, who just like first responders for humans, didn’t hesitate. With their fully stocked ambulance, they used all the supplies that were needed to treat Black on the road. They bandaged him up, administered fluids and pain medication, and then lifted him up and put him on a stretcher. He was then put inside the ambulance to be taken to the vet clinic. 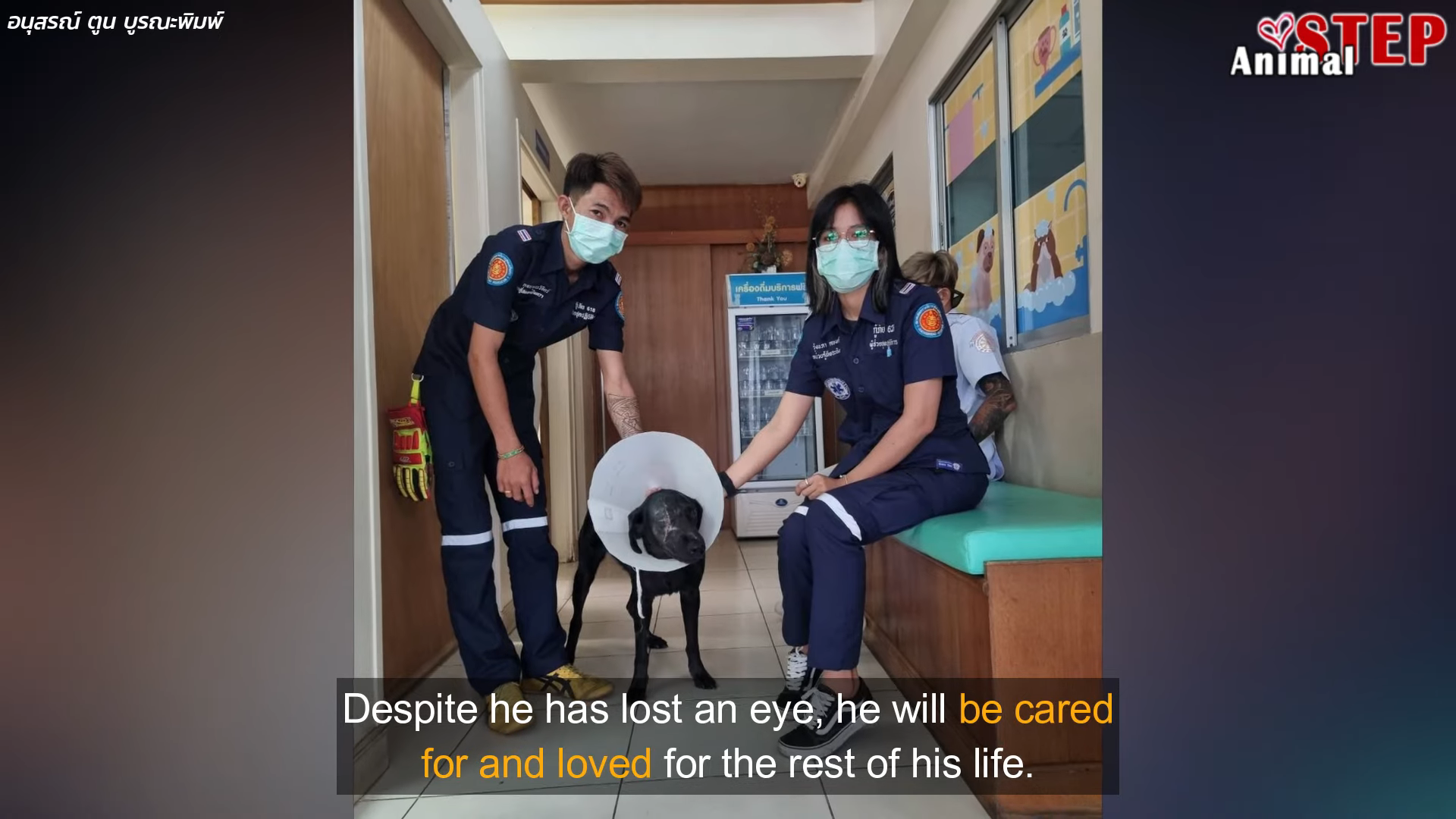 Even though Black was in rough shape, his body began to relax. The pain medication kicked in and he began to trust his new human friends. The rescuers drove as fast as they could to the vet clinic and Black was brought inside right away. The vet came out and did a thorough exam. He began to perk up a bit now that he was in less pain. He was exhausted but finally able to sit up.

His face had to be more extensively bandaged to ensure that the bleeding would stop. The vet was certain that one of Black’s eyes could not be saved. He would need surgery the next morning once he was stable. Black was put into a comfy kennel and watched around the clock. It was imperative that he got a good night’s sleep.

The brave dog did very well during surgery. The veterinarian successfully removed his right eye. Dogs are quite resilient and with some time, and lots of love and patience, Black would adjust just fine. He could still see but most importantly, his life was spared! In a few days, Black was well enough to be taken on a leash to get some fresh air. He was hesitant to go outside. He remembered that the scary world wasn’t always kind to him.

Black looked out the vet clinic doors. He wasn’t sure if he could ever trust leaving the vet clinic again. One of the vet technicians tried to ensure him that it would be okay. But Black didn’t quite trust what was beyond the glass doors. She spoke as calmly as possible and told him she would not leave his side. She led him closer to the sidewalk.

The dog sniffed his surroundings. He tried, with his one eye, to see the world before him. He wondered: Would the outside world be as cruel as before? As the brave dog worked up the courage, and his new human friend rooted him on, something changed inside of him. His big brave heart knew not to give up! To see what happens next, check out the full story below. We are so grateful for Black Bangpakong’s rescue! And you will be too!