JAGUAR IN ACT – the universal soldier of South America! Jaguar against snakes, caimans, capybaras and even otters! 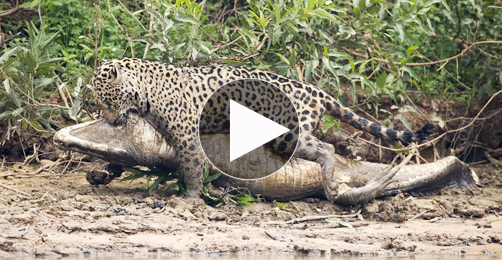 This is the largest cat in the New World and the top of the food chain of the two Americas! A fast, stealthy, silent predator that terrifies the inhabitants of the jungle! Powerful paws catch up with any animal in a few jumps, and huge fangs will not give potential prey a single chance of salvation.

Meet the Jaguar! A real universal soldier who has absorbed the best features of the cat family! In addition to its strength and stealth, the jaguar climbs trees no worse than a leopard. And he is not afraid of water and can even dive! This allows the predator, if necessary, to get his own fish.

But still, the main prey of the jaguar is capybaras and caimans! In the video, you will see how this predatory cat hunts caimans, capybaras, snakes, and even anteaters. And also look at the confrontation between two jaguars and the clashes between these cats and gangs of giant otters!