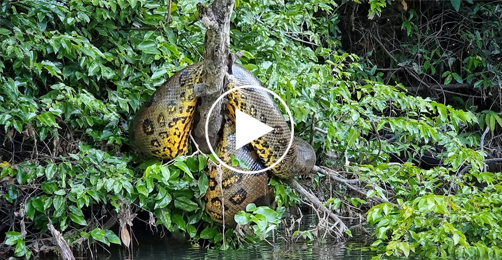 We found the biggest and most feared predator in the Amazon, a gigantic anaconda (anaconda) sleeping, sunbathing on top of a log… A frightening and enchanting scene, a magnificent encounter that I had always dreamed of and now it was realized!

Only those who have seen such monsters know how exciting and frightening it can be at the same time! As an environmental manager, I also live in Rondônia and I have come across some smaller and some more scary examples! Anaconda is a harmless and beautiful animal! She is sunbathing or digesting food and almost 99% chance that she will not attack the fisherman!

Unlike what happened in the video that went viral last week, this is exactly what you have to do when you find such an animal in its habitat, contemplate it, respect it, if possible record the moment and go on your way leaving the animal in peace.